COVID-19: Masks are required throughout all facilities. Limited visitation is permitted for hospitalized patients

ANN ARBOR, Mich. – Young adults who had greater endurance in treadmill tests lived longer and were less likely to suffer heart attacks or stroke later in life, according to a study published online by JAMA Internal Medicine. 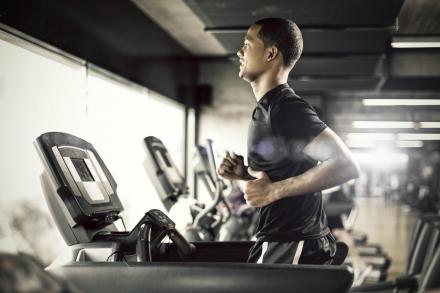 Exercise testing among young adults may show adverse changes in heart muscle strength and function earlier than other signs like calcium build-up.

The long-term study of a large racially diverse group of U.S. adults, age 18-30, further emphasizes the importance of being physically active, and suggests drawbacks of a commonly used test to predict heart attack risk.

Surprisingly, fitness was not associated with coronary artery calcification (CAC) after 25 years of follow-up. A CAC score gives an idea of the extent of atherosclerotic plaque buildup in the arteries. Doctors commonly use the score for insight into a patient’s risk for a heart condition.

“The fact that fitness was associated with outcomes but not calcium score suggests limitations of using calcium score to predict heart attack risk in young and middle-aged adults,” says study co-first author Venkatesh Murthy, M.D., Ph.D., cardiologist at the University of Michigan Frankel Cardiovascular Center and assistant professor of internal medicine at the University of Michigan.

Calcium score is a powerful tool to identify high-risk heart patients, but previous studies have examined middle-aged and older patients.

“Calcium score may not encompass all aspects of cardiovascular risk,” Murthy says. “The current study highlights the importance of fitness among young adults, decades before people develop even early signs of heart disease like coronary calcium.”

The study included 4,872 adults who underwent treadmill exercise testing for baseline results in March 1985 to June 1986 and 2,472 individuals who had a second treadmill test seven years later.

Among the 4,872 participants, 273 (5.6 percent) died and 193 (4 percent) experienced cardiovascular disease events during follow-up. Among the deaths, 200 were not cardiovascular related and the greatest number of those, about 45 or 22.5 percent, were due to cancer.

“Efforts to evaluate and improve fitness in early adulthood may affect long-term health at the earliest stages in cardiovascular disease pathogenesis,” according to the study authors.

734-936-4000 after hours, weekends, and holidays (ask for the PR person on call) MichMedmedia@med.umich.edu for embargoed news, videos & more